With a quick tap of your device, you can use your Washington Financial Bank Mastercard debit card to pay at millions of store locations that accept mobile payments. You get all of the same benefits your card offers, including added protection of Mastercard Zero Liability.*

Plus, you can also use any of these trusted wallets:

Adding layers of security to every transaction

Each time you use one of these trusted solutions, a unique one-time-use number, or token, is used so that your payment information is never shared with merchants or stored on your device.**

Whether you're grabbing a quick lunch, picking up groceries or shopping for clothes, use your Washington Financial Bank Mastercard in your mobile device to pay at millions of store locations.

Look for the contactless symbol when you want to make in-store purchases. Tap your device to use your Mastercard to pay. 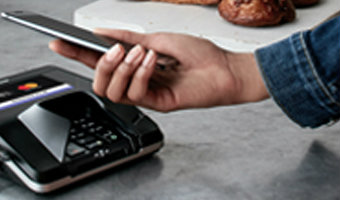 **Masterpass tokenization dependent on the merchant.

Android Pay is compatible with NFC and HCE-enabled devices running KitKat 4.4 and above. Learn more at android.com/pay. Android, Android Pay and the Android Logo are trademarks of Google Inc.